A Risk-Management Approach to Defeating SARS-CoV2 and COVID-19

In 1921, Professor Frank Knight (an economist at the University of Chicago) published his most famous work, Risk, Uncertainty and Profit, where he differentiated ‘risk’ (comprising the realm of future unknowns that depend “on the future being like the past”) from ‘true uncertainty’ (those situations where the future is not just unknown, but truly unknowable, because of an extreme lack of similarity with any relevant prior cases).  As such, he quipped that

(p. 233).
Unfortunately, we are in the midst of a global pandemic that resides much closer to the realm of true uncertainty than risk, giving rise to myriads of ‘opinions’ but scant ‘scientific knowledge’ that is truly actionable.  Six weeks ago, the World Health Organization, the Centers for Disease Control, the U.S. Surgeon General, and other ‘experts’ were all telling us that masks and face coverings were “not effective against respiratory illnesses like the flu and COVID-19” with the Surgeon General specifically stating that people “who don’t know how to wear them properly tend to touch their faces a lot and actually can increase the spread of coronavirus.”  However, now all three are actively encouraging citizens to wear face coverings to help “slow the spread of COVID-19”.
It seems that even the world’s ‘experts’ are adhering to Frank Knight’s prophetic predictions about how

the human reaction to situations of [true uncertainty are] apt to be erratic and extremely various from one individual to another, but the ‘normal’ reaction is subject to well-recognized deviations from the conduct which sound logic would dictate

(emphasis added, p. 235).
With that said, my aim with this blog post is to follow ‘sound logic’ in applying a risk management perspective to the COVID-19 pandemic.  “Risk management” is a term commonly used in the fields of engineering, manufacturing, and business.  The term is equally applicable, but less frequently invoked, with respect to healthcare.  Risk management involves managing exposure to risk by identifying potentially-adverse future events, assessing the likelihood and severity of those events, then proactively mitigating the likelihood and/or severity of the events.
I am not a physician, nor am I an expert in epidemiology or epidemiologic models.  However, I am intimately familiar both with the development of quantitative models and with issues related to the management of risk and uncertainty.  I have an undergraduate engineering degree from MIT, a PhD in engineering from Oklahoma State University, and a PhD in entrepreneurship from Oklahoma State.  My engineering dissertation involved the development of a quantitative risk-management model for controlling cost overruns associated with capital-intensive construction projects.  My entrepreneurship dissertation examined the ways in which entrepreneurs perceive and manage risk and uncertainty, with an emphasis on decision-making in the absence of relevant prior knowledge.
With that said, my goal here is to lay out a path forward that intentionally skews toward the ‘risk’ side of the spectrum and away from decisions that are wrought with ‘true uncertainty’ (i.e. an inherent lack of similitude with prior cases).
Cutting to the chase, here are my overarching conclusions:
As I conducted my risk management analysis, I relied upon the following core pieces of information:
TABLE 1 (from Imperial College Report #9)

Given all the above, and with specific focus on the final bullet point, I assert that the most reliable path to population immunity, i.e. the path that results in 90% fewer overall COVID-19 fatalities, requires a two-pronged approach, namely loosening the social distancing restrictions on those least likely to develop serious complications from exposure to the virus while tightening the guidelines for protecting those who are most vulnerable (coupled with providing robust community support to ease the burden of isolation).  Here is an overview of this proposed path:
The above ‘path to population immunity’ can be summarized by the following visualization: As mentioned above, population immunity can be expected when at least 70% of the population have developed antibodies to the virus.  However, whereas the actual immunity threshold cannot be determined a priori and could be as low as 50%, I have conducted my analyses using both values.  Nonetheless, from a risk-management perspective, the worst-case scenario (in this case, the 70% threshold) should garner particular attention.  Based on recent U.S. Census data, we could achieve over 70% total population exposure via 100% exposure of everyone under 55 years of age (and zero exposure above 55); similarly, we could achieve 50% total population exposure via 70% exposure of everyone under 55.  Although a myriad of combinations exists for achieving any given level of total population exposure, the primary take-away from the analyses presented herein remains the same:  skewing exposure towards those who are at Very Low Risk of serious complications and death will result in FAR fewer overall fatalities (see analyses below).
Using the above exposure-by-age criteria, I ran a set of spreadsheet models using infection fatality ratio (IFR) data from three sources:  [1] the Imperial College model’s IFR inputs (derived from fatality rates in Wuhan, China), [2] Lombardy, Italy, and [3] New York City.  Each spreadsheet model assumes that either 70% or 50% total population exposure would be required before COVID-19 fatalities become negligible, and that Lombardy and New York only achieved 20% population exposure during their respective first waves of the pandemic (this assumption implies that fatalities in Lombardy and New York City will likely reach 3.5 times their current numbers before 70% population immunity would be achieved in each location, or 2.5 times for 50% population immunity). The tables below summarize the results of various iterations of the spreadsheet models.

The charts below show the projected U.S. COVID-19 fatalities and cumulative fatalities by age using the New York City IFR data, comparing 70% exposure evenly-distributed across the U.S. population versus 50% exposure evenly-distributed versus 100% exposure of only those under 55 years of age.  To emphasize the importance of explicitly shielding the vulnerable from exposure, the charts also show the impact of a mere 10% exposure of those 70 years and older, which effectively doubles the number of cumulative fatalities relative to the ‘Under 55 Only’ model.
As can be seen both in the above tables and the charts below, targeting population exposure toward healthier members of the population (which I am proxying by age, due to a lack of more granular health-condition data) can reduce the total fatalities associated with COVID-19 by up to 96%.
The overall duration required to reach population immunity represents another extremely important factor with respect to shielding the vulnerable and overall risk management of the disease.  Regardless of the measures taken to shield the most vulnerable members of society, there will be ‘leakage’ and the LONGER the duration before we achieve population immunity, the MORE leakage we will undoubtedly experience.  In other words, the longer we treat social distancing as a ONE SIZE FITS ALL solution (rather than applying a targeted approach, both geographically and by risk category), the MORE overall fatalities we will experience 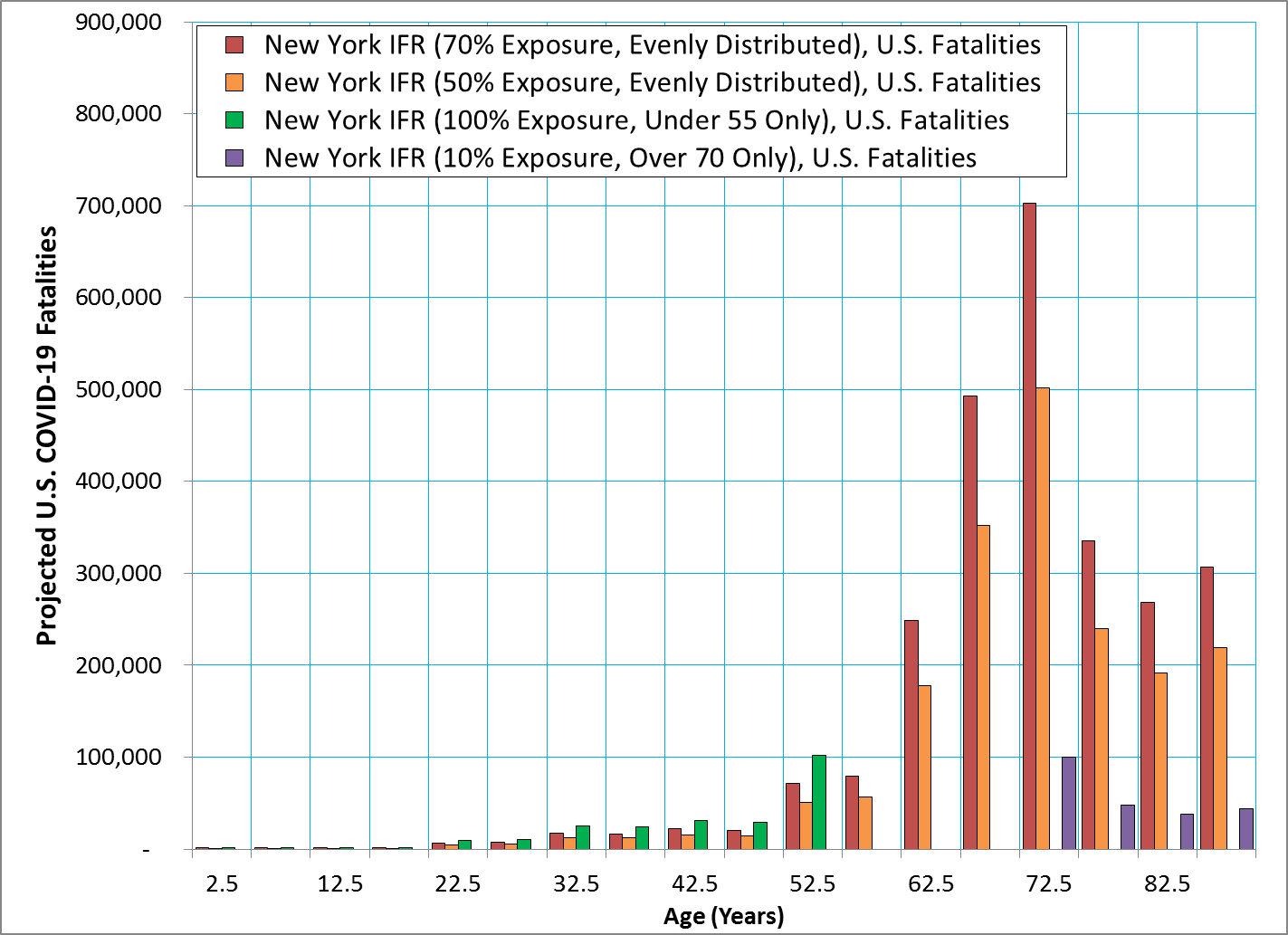 Whereas the models I have presented herein are admittedly unsophisticated, I suggest that an extensive sensitivity analysis be performed using the Imperial College London original model (which is now publicly available on GitHub) or something similar, augmented to evaluate the targeted-exposure approach to population immunity (as presented herein), in tandem with a localized trigger-based approach to protecting local critical care resources (as presented conceptually in both the Imperial College and Harvard models and also detailed here).

Disclaimer: All comments, observations, and statements presented herein represent the opinions of the author and in no way reflect the views of Oklahoma State University or the Institute for the Study of Free Enterprise.

Popular posts from this blog

April 13, 2020
When Oklahoma Governor Kevin Stitt announced on March 24 that he was issuing an order closing all non-essential businesses in 19 counties (which he subsequently extended to all 77 counties), my heart sank.  I knew of no evidence supporting such a drastic move, and I was skeptical that any such evidence actually existed.  In other words, I was skeptical that such a move would significantly reduce the death toll from COVID-19 and I was certain that the fallout (in terms of actual harm caused to individual citizens) would be dramatic.
As a very technical person who remains inherently skeptical of claims not supported by solid evidence and/or well-reasoned arguments, I took it upon myself to review a plethora of reports and data analyses regarding the spread of the deadly SARS-CoV2 virus (the virus that causes COVID-19).  In that respect, I strongly prefer going to the source documents written by acclaimed ‘experts’ rather than merely relying upon interpretations (or interpretations of i…
Post a Comment
Read more

The Rationale for Stopping All Government-Mandated Social Distancing Immediately

April 21, 2020
Epidemiologists universally acknowledge that population immunity is the only way to defeat SARS-CoV2 (the virus that causes COVID-19); population immunity will develop once enough ‘healthy’ individuals have been exposed to and recover from the virus, or once a vaccine has been developed and widely administered. Whereas development of a safe and effective vaccine is at least several months away, and could take years, we need long periods of ‘incomplete’ or ‘partial’ social distancing (but with a tight focus on protecting the most vulnerable members of our society). To put this all into perspective, in their recent SARS-CoV2 / COVID-19 prediction models, Harvard epidemiologists found that “social distancing with 60% reduction in R0 … was so effective that virtually no population immunity was built” (italics added, p. 5). In other words, strong social distancing measures (like those currently in place) are tooeffective -- no population immunity can be built while they are in effect. …
Post a Comment
Read more